Completely sold out, Knotfest Japan launched in the crisp, cold morning with two opening bands, including the Japanese hardcore band Crystal Lake. Their brief set got the crowd warmed up, with hardcore fans “picking up change” in the pit and the rest of us head-banging. The band was joined mid-set by someone who at first I thought was Fred Durst (Limp Bizkit were scheduled to play in the evening) but who turned out to be Senta from the band Numb (sorry for the earlier mistaken report, but if you check out the picture below of Senta backstage, I think you will understand how I made that mistake from a distance) as well as four female hip-hop dancers in track suits for a raucous cover of Limp Bizkit’s “Rollin’.” Not something you normally expect from a hardcore set! By set’s end, Crystal Lake had delivered on the promise shown on their excellent new EP “Cubes,” but as the next band started, it immediately became clear that the opening acts did not have access to the same large sound system as the bands on the main card. 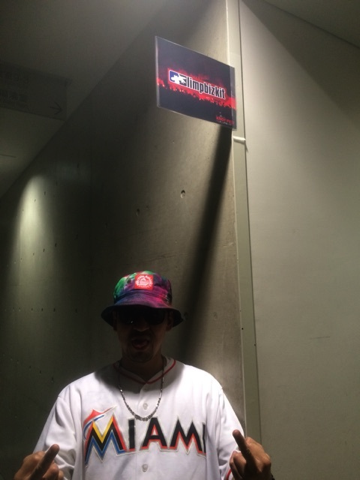 Senta from Numb at Knotfest Japan

Having started the festival on a high note, I grabbed a lunch of salt-flavored ramen (remember: it’s Japan and cold!) and beer (hey, it’s a few minutes after noon!) and then checked out the merchandise situation. Despite having opened early at 8 a.m., the merch area was still completely packed as of 1 p.m. Somebody’s getting paid! I gave up on merch for the moment and headed back to the floor to grab a choice spot for Japanese sensation Crossfaith. On the way, I witnessed (and maybe participated in a little!) an explosive group karaoke rendition of Babymetal’s “Iijime Dame Zettai” complete with a mini mosh pit and a female fan doing the song justice on the big Joysounds karaoke machine set up in the arena’s lobby. While waiting for Crossfaith to start, I saw all of Bring Me the Horizon’s set. The crowd was really into it, but I didn’t know any of the material so it was hard to judge. In contrast, I was prepared for Crossfaith and they impressed. The band was so eager to get going they actually played a part of a song during the brief sound check period between bands. Their set was a personal highlight for me. The crowd jumping up and down during “Jagerbomb” was so violent and crazy I actually got a bit worried. From the stage, Kenta made an eloquent speech about how everyone in the room should be proud for supporting a local scene that had produced so many good bands that Slipknot was able to put on a festival in which about half the bands were Japanese.

Following Crossfaith, I immediately made my way back to Stage B to check out fellow Virginians Lamb of God. For a very heavy band, their sound sure works in an arena setting, and Randy’s voice and stage presence were both in fine form. In fact, LOG went over so well with the audience that it called into question their low placement on the bill. Randy concluded the set by dedicating “Black Label” to Daniel Nosek, the Czech fan whose untimely death at a LOG show led to Randy’s manslaughter trial in 2013. I was so inspired by their performance, I dropped by the now relatively open merch area and picked up a LOG shirt on my way home (I had to leave early on the first day due to another commitment so I missed Slipknot’ first night performance (as well as some crap nu-metal bands)).

Day 2 began later for me as the old need their beauty sleep, so I showed up fashionably late at around 1:30 p.m., just in time to scarf down a Japanese-style hamburger for lunch and make my way to the middle-back in front of Stage B for the mighty Amon Amarth. The first thing I noticed was the great clear guitar sound (an improvement from the day before) that would carry over to all the other acts that appeared on Stage B for the rest of the day. The crowd was really into it and was obviously disappointed that the set was only thirty minutes long. The highlight for me was “The Pursuit of Vikings,” but closer “Guardians of Asgaard” was a close second.

After taking a break to walk around and get a beer, I caught a bit of Five Finger Death Punch’s set and was not impressed. In particular, their cover of “Bad Company” is truly awful. The expectations bar was thus lowered nearly to the floor as In Flames took the stage. This began a series of performance by bands (In Flames, Trivium and Korn) whose most recent albums I cannot say are among my favorites in their catalogs. However, after watching In Flames play a convincing set of songs taken mostly from their most recent albums and which completely ignored their first decade of work, I reconsidered my opinion of “Siren Charms” and began to see what the band has been working toward over the last three records. Oftentimes, when bands shift from purely death metal growls to lots of clear singing, the singer’s clear vocals are just not distinctive or interesting enough. Anders Fridénm definitely does not fall into that category. His voice sounded great both in the clear and on interspersed growls. The new material worked live and the band on the whole looked invigorated. I listened to the new record after the show and liked it a lot better. Since Reroute to Remain, In Flames has been transitioning into something other than a Swedish death metal band, and I think I’m finally starting to appreciate their current destination. Live music can be so revelatory.

The arena was packed as Trivium took the stage so I caught the show from some distance. Going in, I had mixed feelings about their new album, but the new material also worked well here. In particular, I was impressed with the improvment in their vocals. Matt’s clear singing has never been better (possibly he learned something from David Draiman, who produced the new record?) and the harmony vocals with Paolo sounded really well done. Finally, Corey’s growls are now at least as good as Matt’s, which undergirds the heaviness in their newer material. Matt spoke alot of Japanese, which the crowed loved, and the set culuminted with “In Waves,” the heaviest moment of their show. This experience again made me reconsider the new record. My current feeling is that if any band gets to grab the brass ring of rock radio stardom (such as Distrubed, All That Remains, etc.), I hope it is Trivium because they bring so much more to the table than other acts currently trending (e.g, Five Finger Death Punch, etc.).

When Korn headlined Loud Park 2010, I realized I could still like them as a live band whatever my opinion was of their recent studio work. Here again, the band delivered a blistering, all-business performance that was highly entertaining. In particular, Jonathan Davis was in shining form, and I was struck by the huge variety of singing styles he can competently handle. Again, although after one listen, I had not liked the new album, but after hearing three new tunes sound pretty good in the midst of so many classics, I will have to revaluate “The Paradigm Shift.”

Slipknot’s set was like having a crushing weight loaded on to your chest, with the pressure only lessening for brief intervals between songs. The Japanese fans got treated to the complete custom-bulit stage set and lots of special effects. I already loved the new album, so I was eager to hear the new stuff and the Knot did not disappoint, playing four new songs in a slightly abbreviated festival set. Corey’s voice sounded great and was brimming with emotion, and he was clearly thrilled with the success of the festival which he declared from the stage was the “first annual Knotfest Japan.” If that is true, with Ozzfest coming back again in 2015, Japan now has three large metal festivals (Ozzfest, Loud Park, and Knotfest). Slipknot’s set was so pummeling (and I was so exhausted by the weekend’s activities), by the time “The Blister Exists” started, I was physically done and had to head home a bit early, missing “Custer” and the encore. Overall, the festival was clearly a huge success in all dimensions, from ticket and merch sales to the number of quality performances. I look forward to Knotfest Japan 2015!

This post has a response:
November 19, 2014 Re: Knotfest Japan Full Report

I well understand the importance of keeping oneself well-fed and hydrated for these grueling festivals. Also, since when are we worrying about what time of day is the start of...